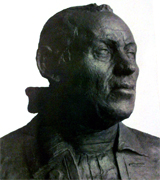 Vitus Jonassen Bering was born in the port town of Horsens on the East coast of the Jutland Peninsula, Denmark, and was baptised on August 5, 1681. He died on December 19, 1741, on the island, near the Kamchatka Peninsula, which was given the name Bering Island after him. In Russia he was also known as Ivan Ivanovich Bering.

At the age of 15, Vitus signed on as a ship's boy. Between 1696 and 1704, Bering travelled the seas, reaching India and the Dutch East Indies while also finding time to complete naval officer training in Amsterdam.

In 1704 in Amsterdam under the guidance of Norwegian-born Russian admiral Cornelius Cruys, Bering enlisted with the Russian navy, taking the rank of deputy lieutenant. He was registered with the Russian Navy’s Admiralty, which at that time was in Voronezh city at the Don River.

Bering was selected by Peter the Great to captain the first Kamchatka expedition. An expedition set to sail north from Russian outposts on the Kamchatka Peninsula with the main task of mapping the new areas visited and particularly establishing if Asia and America shared a land border. 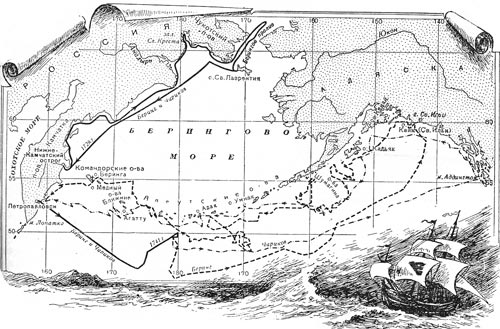 Bering departed St. Petersburg in February 1725 at the head of a 34-man expedition, aided by the expertise of lieutenants Martin Spangberg and Aleksei Chirikov. The party took on men as it travelled through Siberia towards Okhotsk. From there, they sailed to the Kamchatka peninsula where a camp was set up and ships were built.

On the 13th of August 1728, Bering sailed round the Northeast corner of Asia, thus proving that there was water between Asia and America. The American coast was hidden in fog, though. Bering returned to St. Petersburg with the news but was criticised for not having actually seen the American coast.

For the first expedition, Bering was rewarded with money, prestige, and a promotion to the noble rank of Captain Commander and he immediately started preparations for the second Kamchatka Expedition, the so-called Great Nordic Expedition. It was better prepared, much more ambitious and the largest expedition the world ever saw. It included 10,000 men all in all. Vitus Bering was the leader and besides the overall organisation, it was his task to find and map the West coast of America.

Bering reached America on July 15, 1741. On the way home his ship stranded on a small bare island near Kamchatka. Bering and his crew had to spend the winter on the island, living in driftwood huts that were dug into the sand. Many of the crew died. On December 19, 1741, Vitus Bering also died and was buried on the island. It was later given the name‘Bering Island’.